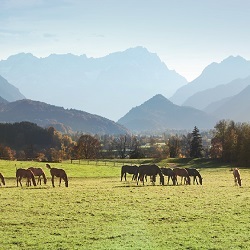 Transitioning your horse to grass in the spring


Finally, after a long winter, our horses can enjoy being turned out as soon as the pastures take on a green hue and the terrain allows. The transition from stable to pasture should be carried out with care, because it means considerable changes in diet for the equine gut.


Grass isn't hay – and not all grasses are the same


During the winter months, hay tops the list on equine feeding plans. Quality hay from the first cut consists of about one quarter crude fibre and one tenth protein. The proportion of easily fermentable carbohydrates (starches, sugars, fructans) is generally between ten and twenty percent. This means that the gut bacteria's dietary basis during the winter is normally quite stable and balanced. The equine microbiome in the large intestine strikes a balance that is perfectly adapted to this food supply.

This balance can be upset by the switch to grazing. Besides species composition, the young pasture grass in spring has little in common with hay, even visually: it is much shorter, thinner, and greener. It contains more protein and carbohydrates (sugars, fructans) and less crude fibre than hay.

Since grass is a living organism and reacts to environmental influences, its nutrient content can also fluctuate greatly: weather, sunlight and grazing intensity can have a strong influence on pasture grass's fructan content during the entire grazing period.


Abrupt changes throw the gut out of balance 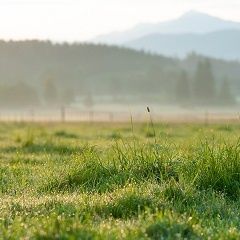 Due to its nutrient composition, young green vegetation in spring doesn't make an optimal base feed. A sudden transition from hay to pasture grass will throw a horse's gut dangerously out of balance. Horses that are simply allowed one day to spend several hours grazing juicy young grass are at risk of suffering from colic, diarrhoea and hyperacidity in the large intestine.

This is because carbohydrates and proteins which enter the large intestine undigested in large quantities change the composition of the gut flora. Degradation causes more acids (from microbial carbohydrate breakdown) and gases (from carbohydrate and protein breakdown) to be produced than usual, which also disturbs the balance in the intestine.


Many horse owners have to take their horse's transition to pasture into their own hands. In most yards there is only the date marking the start of the grazing season – often beginning with a full hour or even several hours of turnout. A few weeks before the start of the grazing season it is therefore advisable to begin with short grazing in hand and gradually extend the duration.

To be on the safe side, take at least a week to build up to 30 minutes of pasture time, with only five minutes permitted on the first day. Allow the horse five minutes longer on the coveted green pasture each day, providing there are no digestive problems such as bloating, soft faeces or diarrhoea. If these occur, revert back to the duration when the gut was still in balance and begin increases of five minutes every second day.

Once thirty minutes has been reached, most horses can then be allowed ten minutes more each day. Once a full hour is reached, increasing by 15-minute increments is usually no problem, although this will depend on the individual horse. Digestion problems during grazing should always be countered by a reduction in grazing time to avoid the risk of colic. 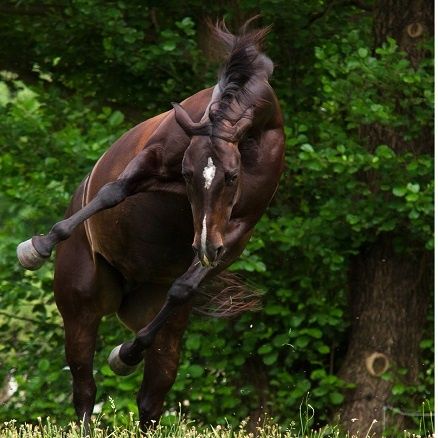 some yards still kick off the grazing season with several hours of turnout and no advance preparation. At the same time, they may reduce or even do away with hay rations. This is a dangerous practice, and yet horse owners often have their hands tied if the yard takes such measures.

If a slow transition to young grass is not possible, supplementing forage with high-quality crude fibre products can at least help to stabilise the gut flora. The best option, of course, is hay. When not available, hay replacers (Pre Alpin®) are a good alternative.

Not all horses can be turned out without care


Even after a thorough transition process, there may be hazards: ponies in particular are at risk of laminitis due to their susceptibility to insulin resistance and their eager consumption of high-fructan pasture grass. Grazing is taboo for horses with laminitis. Those susceptible to laminitis, especially if they are overweight, should be allowed to graze only on rationed portions of pasture or with grazing muzzles. Here too, it's better to be safe than sorry.