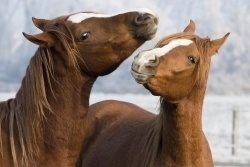 Feed for animals with laminitis

How important is roughage?

Laminitis (pododermatitis diffusa aseptica) is a very painful, non-infectious inflammation of the hoof corium – the hoof capsule becomes detached from the corium as a result of persistent disturbance to the micro-circulation of the blood, which in turn can lead to a sinking and/or rotation of the coffin bone - in extreme cases even to hoof slough.

The most common cause of laminitis is from endotoxins. This is mainly caused by eating excess carbohydrates (grains) but also from grasses that are high in fructan. Laminitis caused by feed was described back in 750 B.C. by Homer and in 400 B.C. by Xenophon, who both used descriptive terms such as "crithiasis" (barley disease) and "plesmone" (overfeeding). Aristotle also used the term crithiasis in 350 B.C., which indicates that the disease’s connection to grain feeding was known even then. From this, one may conclude that there have been occurrences of laminitis ever since man started feeding cereals to horses. At first this would have been mainly barley, later largely replaced by oats, which were more easily digestible. Laminitis can also occur from endotoxins released in the bloodstream as a result of infectious diseases or from a retained placenta after foaling. Laminitis can also be caused by ingesting yew, which is toxic, or from bearing excess weight. Even horses suffering from Cushing's disease often have problems with laminitis.


The different phases of laminitis


Prodromal phase:
In this initial phase there are no typical symptoms. A horse may display unspecific symptoms such as restlessness, apathy or a loss of appetite. This phase lasts from the beginning of the disease until the first typical clinical symptoms appear. By the end of this phase, irreversible structural changes to the suspensory apparatus of the hoof are usually already detectable.

Subacute laminitis:
This is a "mild" form of laminitis. There are few clinical symptoms, and these disappear quickly. This form usually occurs in horses that have been worked on a hard surface or whose soles have been trimmed too thin. One can feel a light pulsating of the common palmar digital artery.

Acute laminitis:
Lameness is usually clearly present in one pair of extremities, or all four. The horse taking a sawhorse-like stance is also typical.

Chronic laminitis:
This phase includes lameness that lasts over 48 hours. In addition, changes to the suspensory apparatus of the hoof (e.g. a sunken or rotated coffin bone) are visible in X-rays. Chronic laminitis can last for several weeks or even a lifetime.


Typical changes are a widened white line and the formation of laminitis rings. Dietary changes play an important role in treating laminitis.

First, however, let’s discuss what actually happens when an excess of concentrated feed enters the intestine. The first difference with concentrated feed, as opposed to roughage, is in how the horse eats. Concentrated feed is eaten much faster, so that the horse salivates less than when eating hay or straw. Gastric juices in the stomach will have more difficulty penetrating the chime. They cannot do their job, which is to kill germs. These easily-digestible carbohydrates can also cause an increase in lactic acid, resulting in gastritis (see also our article on gastritis). The actual digestion of the nutrients in concentrated feed takes place in the small intestine, but the food remains there for no more than 1.5 hours. If the horse consumes only small amounts of concentrated feed, this will be digested here almost completely. If too much concentrated feed is consumed, it cannot be completely digested in the small intestine and will then pass further in this partially-digested state into the hindgut. The hindgut is where roughage is digested through the presence of cellulose-splitting bacteria in a basic environment. If carbohydrate-rich concentrated feed now reaches the hindgut, the composition of the bacteria changes. The lactic acid-producing bacteria multiply (dysbiosis), which lead to a pH value reduction and hyperacidity (acidosis) through the production of lactic acid. The acidic medium in turn damages the intestinal mucosa and causes the cellulose-splitting bacteria to die. As the bacteria die, endotoxins are released which enter the bloodstream via the damaged intestinal mucosa. There they can trigger various metabolic problems, such as laminitis.

In addition to the feed-related laminitis caused by excessive concentrated feed, a pasture that’s very high in sugars and fructan levels or poisonous plants (vetch, acacia or acorns) can also lead to symptoms of laminitis. These very different causes, however, can all lead to a derailment of the metabolism, which manifests itself mainly in the hoofs.

Precautionary measures can also be taken with regard to time of day and temperature, as these affect the fructan content. Basically, the following applies: If the grass gets a lot of sun, it can produce energy via photosynthesis. If the grass cannot convert this energy into growth because it is still too cold, then this energy is stored in the form of fructan. This means that fructan content is highest on sunny, cold days, and the pasture is taboo for sensitive horses!

For this reason, the horse’s diet should be considered in addition to veterinary treatment and possibly special hoof care. Overweight horses which have already had an attack of laminitis should lose weight. In the past, horses with laminitis were put on fasts. This should not be done, however, as it puts additional strain on the organism. The horse should get the nutrients it needs in order to relieve its metabolism. It should therefore be fed high-quality, low-sugar hay. Concentrated feed should be avoided or given only upon consultation with your vet. A suitable mineral feed should be included, however, since the hooves or hoof coria need these nutrients for regeneration.

In order to avoid further damage to the organism, it is also recommended to carry out detoxification treatments for the liver and kidneys. Herbal mixes that are well-suited for this are Bergsiegel Kräuter for the liver and Bergsiegel Kräuter for the kidneys. You can also support your horse with a liver and kidney detoxification treatment as a preventative measure during moulting or after a worming programme or longer medication doses.

A positive course of treatment is necessary so that the damaged intestinal mucosa and the intestinal flora are given the chance to recover. The most important step, as mentioned above, is to feed your horse hay. In addition, little to no concentrated feed, or AGROBS LeichtGenuss or Pre Alpin® Aspero as a concentrated feed substitute, can also be added to concentrated feed to improve digestion. In both laminitis-stricken and healthy horses, chaff contributes to increased chewing activity and thus to better salivation, and this improves and relieves the entire digestive process. AGROBS LeichtGenuss is a very low-energy feed specially made for good eaters and overweight horses.
AGROBS AlpenGrün Mash is particularly suitable for intestinal regeneration. AGROBS AlpenGrün Mash is prebiotic, free of cereals or molasses, contains many mucilaginous substances that are beneficial to equine guts and supports digestion. In addition, live yeast and linseed contribute to the regeneration of intestinal mucosa. AGROBS AlpenGrün Müsli is a healthy, cereal-free and molasses-free concentrated feed alternative that is low in starch and sugar, making it also suitable for insulin-sensitive horses. The feeding of crude fibre in the form of hay or AGROBS crude fibre products* are recommended during the grazing period in spring or when grasses have high fructan contents, especially for horses with a history of laminitis. In addition, care should be taken when turning laminitis-susceptible horses out to pasture.

With very susceptible horses or unreliable management, turnout is best foregone entirely as a precaution.
Note that it is much easier for a horse suffering from laminitis to relapse again than it is for a healthy horse to come down with it, as it takes a very long time for the metabolic processes in the body to regenerate after such a serious illness. Long-term feeding of high-quality roughage is therefore particularly important in order to provide the organism with sustained protection. Here, it is recommended that you use AGROBS crude fibre products* as a 100% hay substitute or as a supplement to base feed. Due to its balanced mix of high-quality grasses and herbs harvested from the foothills of the Alps and their gentle processing, AGROBS crude fibre products* provide natural nutrients and vital substances and are particularly easy to digest. Long-term feeding with high-quality AGROBS crude fibre products* will also help keep your horse healthy and prevent illnesses over time.

(* The references refer to the technical content of the text and not to the product recommendations.)