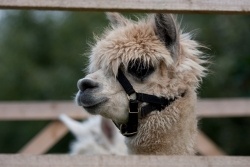 Tips for feeding alpacas and llamas


Llamas and alpacas are raised for their wool. They are also enjoying increasing popularity as pack animals for trekking tours, as therapy animals and as hobby animals.

Appropriate feeding is important to maintain good health, reproduction and wool. Alpacas and llamas evolved in the harsh climate of the Andes and thus need feedstuffs high is roughage and low in nutrients. They make very good use of their food, whereby instances of ingesting foreign bodies are rare, in comparison to cattle. Llamas and alpacas, like cattle, sheep and goats, have digestive systems that include foregut fermentation through microbes (bacteria, protozoa, fungi). In contrast to genuine ruminants, the stomach of the New World camelid does not consist of several stomachs but of three-chambered stomach. Nevertheless, there are functional similarities in the stomachs of ruminants and camelids. In camelids, roughage is also digested by microbes in the first two chambers, as well as in a large part of the third chamber. The feed is broken down through the microbes’ enzymes, resulting in fatty acids and various water-soluble vitamins which then in turn can be absorbed by the animal through the intestinal mucosa.
A change of feed should always take place slowly with camelids, since an abrupt change in feed will destroy the microbes in the foregut and this can lead to life-threatening digestive disorders.

New World camelids re-chew their food as well. Larger food particles are regurgitated through stomach contractions to be broken down and then swallowed again. Gasses formed through the fermentation processes are released by the animal in regular intervals through eructation (belching).

Feed should mainly consist of roughage in the form of hay or AGROBS hay substitute products such as AlpenHeu, and should be offered in sufficient quantities. Such feed has a high structure which promotes saliva production. This in turn serves as a buffer substance for the foregut and makes the feed slippery. Feed with little crude fibre but high grain content can cause hyperacidity in the foregut and lead to digestive disorders. A feed straw supplement such as Stroh can also be offered in addition to hay.

Llamas and alpacas can be offered branches from non-toxic trees to nibble on as a pastime.

A mineral feed specially tailored to the needs of camelids should be fed in addition to the basic and supplementary feed, in order to provide adequate minerals and trace elements. A salt lick such as AGROBS Bavaria Steinsalz should always be available in order to prevent electrolyte losses.


Dr. med. vet. Katharina Boes
July 2015  ©AGROBS GmbH
Sources*:
(* The references refer to the technical content of the text and not to the product recommendations.)
Kurzberatung
Ausführliche Beratung