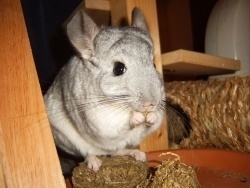 Important aspects of nutrition for chinchillas and degus

Like guinea pigs and rabbits, degus and chinchillas are also herbivorous hindgut fermenters.


Chinchillas live in herds at high elevations of the Andes in South America. They have no problem with severe temperature swings between day and night. However, their coats are not water-repellent and so they cannot tolerate high humidity or even moisture. Wild chinchillas spend considerable time feeding on grasses, leaves, roots, seeds and bark. Chinchillas are active at night and in twilight hours and should therefore be fed accordingly in the evenings.

Domesticated chinchillas were long bred exclusively for their coveted fur. They are given high amounts of high-energy, high-protein feed in order to develop a desired thick coat within a short time. However, this diet is not conducive to longevity. Another disadvantage of such feeding is that the animals only need a small amount of time to eat (in contrast to chinchillas in the wild), as high-energy feed leads to faster satiation. Proper nutrition for chinchillas should align to their diet in the wild. In their natural habitat, wild chinchillas experience a mostly dry climate with very poor vegetation. The animals therefore need feed that is low in energy and rich in crude fibre. They do not tolerate concentrated feeds. Their diet consists mostly of dried grasses, leaves and herbs.

Degus are rodents that are originally native to Chile. Wild degus live in underground caves into which they retreat at night. During their active phase they like to run and gnaw. The degu’s natural diet is also quite meagre. The digestive system has adapted to this and is able to convert sufficient energy from grasses, herbs, leaves and bark. When kept as pets, degus require a lean diet, as they are very susceptible to diabetes and are also prone to digestive problems and obesity if fed incorrectly.

A constant supply of good roughage, such as Wiesenheu, Kräuterlinge or Sensitive, should be used as a basis for feeding domesticated chinchillas and degus. It helps wear down the teeth, supplies vital crude fibre and improves digestion. If the animals eat little or no hay, if no good hay is available or if the animal is allergic to hay, this may be replaced or supplemented by AGROBS Grundfutter. Animals that only eat a small amount of hay will like dried grass products like Kräuterlinge or Sensitiv. The animal can also keep itself busy by carrying these around and gnawing on them.


Feed shops mainly offer pelleted compound feed as a hay supplement. One should look for feed that was actually produced for chinchillas or degus. Rich blends containing large amounts of cereals, nuts or fruit are not recommended for chinchillas and degus. It is also important not to feed too large a quantity of pellets in order to ensure the animals eat a sufficient amount of hay. Most kinds of pellets are made for chinchillas and should not be given to degus, which are prone to diabetes, because of a high molasses content. They should be given feed containing dried grasses, herbs, flowers and a small amount of dried vegetables. Degus enjoy fresh foods, such as vegetables and herbs. Carrots, dandelion, grass and parsley are just a few examples. Refrain from adding sweet fruit due to the animals’ susceptibility to diabetes. The same also applies to mixed grains, milk and dairy products, etc.

There are other compound feeds besides pellets which have tasty added ingredients (like raisins and nuts). Animals like these ingredients, but in larger quantities they are rather unhealthy for the animal. Feeds with a high percentage of grain also don’t correspond to the lean diet that chinchillas and degus require. Gently dried grasses, flowers and herbs are alternatives to typical dry feed which is mostly cereal-based. These bear close similarity to the animal’s natural diet and while providing a welcome variety. Naturmix and Blütenmix contain such a mixture: delicious, rich in vital substances and low in sugar. Blütenmix can be used either as a complete or supplemental feed. Its mix of flowers, grasses and herbs provide variety in the animal’s diet in a natural and healthy way. Naturmix only uses ingredients that correspond to the natural diets of degus and chinchillas and therefore makes an appropriate supplement to base feed or hay.

Chinchillas and degus also need material on which to gnaw. These animals have teeth that grow continuously and must be worn down through regular gnawing and chewing. Suitable materials (such as twigs) can be collected outdoors in nature or purchased in pet shops.

This will also help keep them from chewing on things they’re not supposed to. Rosenblütenblätter or Ringelblumenblüten make good healthy in-between snacks for your pet.
Kurzberatung
Ausführliche Beratung