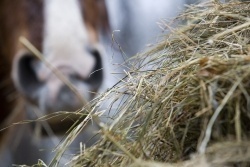 The necessity of base feed

Vegetable cellular substances (crude fibre), as contained in base feed or roughage, are called the "digestive motor" because they are indispensable for the digestive tract of the horse.
The consumption of base feed and roughage promotes tooth erosion in connection with longer feed intake and increased mastication. Increased saliva production has a positive effect on the entire digestive process.
As plant eaters, horses also depend on base feed or roughage to cover their energy requirements. Their cellulose is digested by microorganisms in the horse’s large intestine. The resulting volatile fatty acids produce energy.
If the horse does not have sufficient base feed available, the microorganisms in the large intestine cannot provide sufficient nutrients. The resulting intestinal problems will have a negative impact on the horse’s entire organism.


The required base feed quantity

Required base feed quantity is determined by your horse’s body weight in order to ensure an adequate supply. Assume a minimum quantity of about 1.2 to 1.5 kg per 100 kg of your horse’s target body weight. This means that a 600-kilogramme horse has a daily requirement of 7.2 to 9 kilograms of hay or Pre Alpine feed. Silage will increase this daily requirement because silage contains more water than hay and Pre Alpin.

The quality of the base feed depends considerably on the starting product. Well maintained, evenly fertilised meadows and the right harvest time will influence the base feed’s nutritional and structural value. Of course, local conditions like soil and climate also play a role in plant growth. One should always aim for a species-rich and varied composition of valuable meadow herbs and grasses. The spread of toxic plants can be prevented by conscientious care – regular inspections of the meadows provide additional safety.
Fresh green feed is not always available in our latitudes, and many horses are kept indoors all year round. This makes the preservation of base feed necessary. The moment it is harvested, green feed is subject to a natural decomposition process. The aim of preservation is to deactivate the plant's own decomposing enzymes and prevent microbial degradation.
The quality of the preserved base feed will depend on the quality of the starting product, as well as on the type of preservation. This will bring about somewhat substantial changes of the contents. The losses to energy and nutrients are particularly high with ground-dried hay, which can be 25–50% of the original dry matter depending on the drying time. The production of silage leads to slightly lower losses of energy and nutrients only if it is well produced.

The losses in air drying are minimal, ranging between only 3% and 5% of the original dry matter.


Critical substances in base feed

A horse’s health directly depends on the quality of its base feed. If the base feed is filled with microorganisms such as bacteria and fungi as well as their toxins, digestive and metabolic disorders may result. In addition, particles released into the air from the base feed may lead to allergies and damage to the respiratory organs.
Errors in conservation and subsequent storage have a large influence on the base feed’s hygiene. Hay can be stored with approx. 14 % residual moisture. The dry matter content of hay should therefore be at least 86 % at the end of the fermentation phase, because only then is the initiation of dormancy ensured. If the hay is fed beforehand, i.e. during the fermentation phase, this will expose the horse to higher quantities of bacteria, mites and moulds, which can easily lead to digestive disorders, colic and respiratory diseases. Moulds can also cause pregnant mares to miscarry. Hay that has been incompletely dried and/or improperly stored is most prone to spoilage or strong mould growth, especially with Aspergillus fungi and penicillins.
Generally it can be assumed that hay harvested late is subject to a higher bacterial load, particularly from to moulds and yeasts. Rain during the harvest, along with longer drying periods, will additionally increase the occurrence of bacteria and yeasts.

Many mistakes can be made during silage production and storage which can significantly impair feed quality. However, top silage quality is extremely important in feeds, because horses, unlike ruminants, do not have the ability to metabolise certain toxins.

The use of poor quality silage (whether butyric, rotten, mouldy, heavily contaminated or even frozen) can lead to severe digestive disorders and metabolic diseases. According to research, the dry matter content of the green products to be preserved as silage has the greatest impact on its fermentation quality.
Sufficient preservation is difficult to achieve when using hay from late harvested, bulky material. A pH reduction can only occur insufficiently due to the low water content, and a necessary degree of compaction is difficult to achieve. This can quickly result in fermentation defects. The most favourable cutting time must therefore not only depend on the desired nutrient and energy content, but must also take into account sufficient compaction and air sealing and thus an optimum ensiling process.

Care must also be taken not to introduce any green product that has been contaminated with soil and/or carcasses. The bacterium Clostridium botulinum can multiply rapidly and thus cause an outbreak of botulism among horses. The production of silage must be carried out with the greatest possible care in order to produce silage of sufficiently high quality.

Independent of the sensory quality of the silage that is fed to horses, increased instances of ailments are reported, such as watery stool and diarrhoea. This condition, which resembles an allergic reaction, improves when the horse is fed good hay (AlpenHeu), Pre Alpin (Pre Alpin Wiesencobs, Pre Alpin Wiesenflakes, Pre Alpin Aspero, Pre Alpin compact) or grass, and worsens when the horse is again fed silage. This is partly due to the increased existence of histamine in silages, to which some horses are sensitive. Moreover, a purgative effect from silage has also been reported.

The artificial warm-air drying of herbage to a minimal water content (under 12 %) prevents the development of moulds, in contrast to conventional hay production.